Ransomware is now the biggest cybersecurity threat. More than 80% of cyber incidents have financial motivation. Forescout’s Vedere Labs released a comprehensive report that includes a detailed playbook describing how organizations can protect themselves against a new type of ransomware that exploits IoT devices, such as video cameras, to deploy ransomware.

The next-generation ransomware described in the R4IoT report uses exposed vulnerable devices, such as an IP video camera or network-attached storage (NAS) device, as the initial access point to the network. It then holds OT devices hostage, thus adding another layer of extortion to an attack campaign. This new attack vector that Vedere Labs predicts will be the next step in ransomware evolution, which will impact all IoT (including IoMT), IT, and OT devices, causing physical disruption of business operations.

Tune in to learn about:

• How this next-generation ransomware would disrupt and impact your organization

• Detailed mitigation steps by TTP and how Forescout can help

Go to Registration
Follow us for all the latest updates!
Follow @opsmatters_uk
Sign up for securitybuzz and we'll keep you up to date with the latest Security News and Information!    Browse »
We never send spam and will not pass your details to anyone else 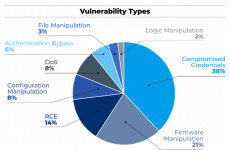 Industroyer2 and INCONTROLLER: New Findings and How Forescout Protects Against the Most Recent ICS-Specific Malware
Jun 14, 2022

Accelerate the Journey to Zero Trust with Forescout and Arista
Jun 30, 2022